NIEM is the acronym for the National Information Exchange Model. This implies that NIEM is a data model. While NIEM does in fact have a data model, there is much more to NIEM than that. This section will describe:

It is best to think of NIEM as a community and standards-like organization similar to the World Wide Web Consortium (W3C) or Open Geospatial Consortium (OGC), whose members voluntarily cooperate to define and employ its technical specifications, data model, etc. While there are of course important differences, some illustrative parallels are:

There are several ways to be a part of NIEM, ranging from merely using a NIEM-based data resource specification, to participating in the committees that create and control the NIEM products.

A data element combines a name, a definition, and a value domain (or data type). For example:

NIEM’s reusable data components are machine-readable data element definitions in different languages; XML Schema, JSON Schema, and RDF. These components are like LEGO(tm) blocks for data; developers choose the blocks they want and assemble them into the data structure they are trying to create.

Following the LEGO analogy, the NIEM data model is a generic box of LEGO blocks that can be used to create many different LEGO structures. The NIEM model is the collection of data components created by the NIEM community, each created because it will be useful in many different data resources. Developers look through the box, choose those components that satisfy their business need, and leave the rest behind. 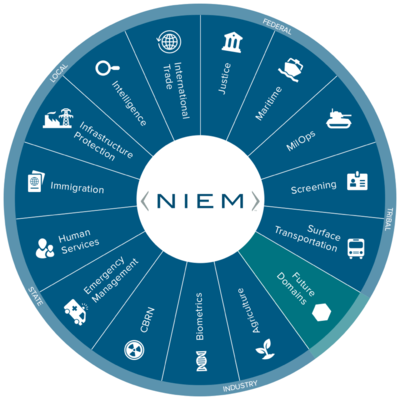 The NIEM data model is not supposed to be comprehensive. It is not the uber-model of everything for everybody. Developers always leave some part of the NIEM model unused, and developers almost always need to define data components of their own for concepts that are not in the NIEM model. (They are encouraged, but not required, to make those components available for others to reuse.)

The NIEM model is partitioned into several subject-area domain models, each managed by a separate domain community according to its needs. There is also the NIEM core, which contains data components thought useful and agreed by all the domain communities. The petal diagram in this section illustrates the NIEM core and current domains. (More on the model management process in NIEM governance.)

The NIEM model is published in two forms. The normative model is currently published as a collection of XML Schema documents. There is also a spreadsheet version. Plans to publish the model as JSON Schema and RDF are on the drawing board.

Developers use the NIEM process to define the syntax and semantics of some data resource. That resource can be the data passed through an API, or messages sent from one system to another, a data document published on the web, etc. The process is:

The schema is the central component of a NIEM-based data resource specification, for historical reasons called the Information Exchange Package Documentation (IEPD). NIEM supplies an IEPD framework for arranging documentation and gathering all of the artifacts needed by developers and analysts. Any number of consumers can use the specification to understand what to expect in the resource; any number of producers can use it to know what they are expected to provide.

LEGO blocks snap together only because of the precise size and location of each block’s pegs and cylinders. If the NIEM model is the set of data blocks, then the NIEM technical specifications are the rules which ensure that separately-developed blocks can be composed into a single schema.

XML is very flexible. Everyone can do their own thing, and, by golly, everyone is! – Steve McVey at XML ‘99

At present most of the NIEM technical specifications are written assuming XML as the data syntax and XML Schema as the primary specification language. There are many, many different ways to represent information with XML. A certain level of consistency is required in order to compose many separately-designed XML data components into a single resource specification that makes sense.

This consistency is accomplished by the NIEM Naming and Design Rules (NDR), which constrains the use of XML and XML Schema within NIEM. Most of the NDR rules are written in Schematron, and can be used to automatically assess conformance of the schema in a resource specification (an IEPD). The NDR also provides a meta-model for NIEM XML, based on the Resource Description Framework (RDF), specifying how XML elements and attributes equate to RDF resources, properties of those resources, and values of those properties.

The technical specifications for NIEM JSON are now on the drawing board. One thing already known: the NDR for NIEM JSON (if one is actually required) can be much simpler than the XML rules. This is because NIEM JSON is based on the JSON-LD specification, which already does for JSON much of what the existing NIEM NDR does for XML.

The NIEM data model is governed by the NIEM Domains and the NIEM Business Architecture Committee (NBAC). The purpose is to create a useful consensus model, with just the data elements that are likely to be used in many exchange specifications, and just as much harmonization as the community thinks worth doing. Domains are organized by subject area, and are open to all interested parties, with participation from US federal, state, local, and tribal government, plus international and commercial members. The NBAC is comprised of domain representatives who govern the NIEM core model.

Those bodies, the NTAC, the NBAC, and the Domains, comprise a voluntary consensus standards body for the NIEM standards. They operate according to the principles of openness, balance of interest, due process, an appeals process, and consensus, as defined in ANSI Essential Requirements.

There are also two administrative bodies above the level of standards development. The NIEM Executive Steering Council (ESC) is the decision-making body regarding membership, funding requirements, program or technical direction, committee, and Program Management Office (PMO) personnel appointments. The NIEM Program Management Office (PMO) executes the vision of NIEM established by the Executive Steering Council (ESC), while managing the day-to-day operations of NIEM. The office encourages the adoption and use of NIEM and oversees all working group and committee activities

Ways To Use And Participate In NIEM

At the simplest level, data scientists and software developers use a specification constructed through the NIEM process as documentation for a data resource they need to produce or consume. In this case the users need not be aware of NIEM at all. For example, the Automated Secure Alarm Protocol (ASAP) is an ANSI standard that is used for machine-to-machine communication data between alarm monitoring companies and 911 centers. Its data format is NIEM-conforming and was created through the NIEM process, but software developers building applications for the protocol do not have to know or care about that. They only have to produce or consume data that conforms to the specification.

The next level of NIEM use is to reuse NIEM components for one portion of a data resource. This treats the NIEM model as just another data vocabulary among others, such as Dublin Core and schema.org.

Scientists and developers may create their own NIEM-based specification to document a data resource they produce. In this case all of the data components will be NIEM-conforming, whether reused from the NIEM model, adapted from another standard, or created from scratch.

Several scientist/developer teams may form a community to create a data resource specification as the standard for data they all produce and consume. Or they may agree on a set of data components they will all use, while not attempting to standardize each complete resource. This is very similar to a NIEM domain’s activity. The new community may seek recognition as a new domain, or affiliation with an existing domain, but is not required to do so.

Scientists and developers can participate in a NIEM domain’s activities, proposing new and modified data elements in the domain submodel for use in multiple specifications. A representative from a NIEM domain will act as a voting member of the NIEM Business Architecture Committee (NBAC). The NBAC governs the NIEM core model; work here often involves harmonizing data definitions among the domain models to create elements that can be used in any domain. An individual may also be invited to participate in the NBAC as a non-voting observer.

This page describes those aspects of the NIEM organization, model, process, and technical specifications that are most relevant to NIEM JSON. Much more information about NIEM is available at the niem.gov website.