Augmentations are NIEM’s mechanism to add additional content to a type defined by another namespace.

Adding additional content to a type is typically done using type extension, but NIEM abandoned that approach due to its limitations. Type extension is limited to a single parent type; augmentations from several different namespaces can be used together because element substitution allows multiple occurrences.

For example, for a domain to add additional content to the Core PersonType using extension, a new domain type would be declared that extended nc:PersonType, and domain properties would be added to it. 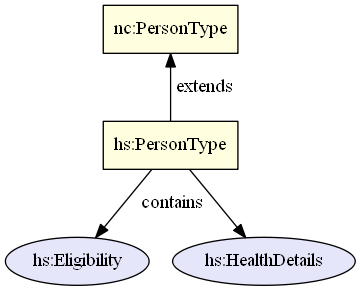 The issue with this is that type extension does not allow for multiple inheritance. If more than one domain extends nc:PersonType, IEPD developers cannot use those related but separate extensions together. They must choose a single type to reuse or derive from. 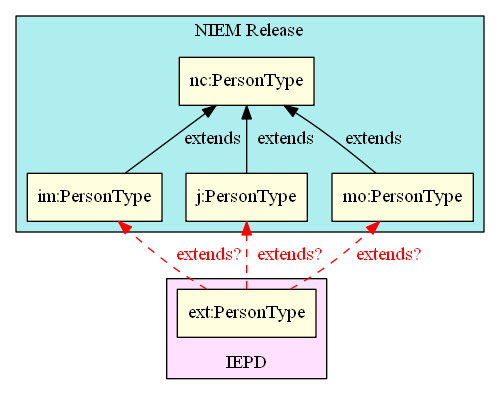 Additionally, type derivation can cause the unintended side effect of cascading extensions. If you are unable to use type substitution in your instance, then once you extend the type you want, you will also need to create a new property of that new type. If the original property is contained by another type you are using, you would then need to extend that type, and then the property of that type, and so on, all the way up the chain.

Augmentations were introduced in NIEM 2.0 to address these issues raised by the NIEM community, and revised in NIEM 3.0 to make them easier to use.

This example shows the diagram above with actual properties and types from NIEM:

Augmentations should be created only when trying to add additional content to an existing type from a namespace outside of your control. If you find a type that has the right semantics and almost meets your requirements, but it is missing some properties that you need, an augmentation should be used to add the missing content.

Specialization in NIEM is still handled via type extension. Specialization is different because it doesn’t just deal with some missing properties - the existing type itself is not the right semantic match for the requirements.

If a user wants to model a train with additional properties like whistle, locomotive, engineer, and caboose, nc:VehicleType might be the closest match but it isn’t an exact match. The semantics are different. All trains may be vehicles, but not all vehicles are trains. Rather than creating an augmentation for nc:VehicleType, a new TrainType should be created that extends nc:VehicleType and adds the train-specific properties.

Because IEPDs do not have to be built with the same degree of flexibility and reusability as NIEM release schemas, they may use either augmentations or extensions. Augmentations may be easier to use in certain circumstances, such as trying to add additional content to a nested object which might otherwise require cascading extensions.

This section is split into two sub-sections: