Each NIEM release comes bundled as a zip file containing schemas and other supporting files.

The image below shows the NIEM 4.0 release package on GitHub, with labels superimposed to point out the various artifacts.

Schemas are located in the niem subdirectory of the package or repo.

The image below shows the schema layout of NIEM 4.0. The XML catalog is also present.

The release README file is a text file that provides a high-level overview of the changes made in the release, and in particular any changes that might affect Core.

This file is located in the root of the package or repo. The file name is README.md.

The format is “Markdown”, which provides simple syntax for basic HTML formatting. Markdown files can be viewed as plain text in any text editor, but the HTML formatting is rendered for a better display on GitHub or a markdown viewer. 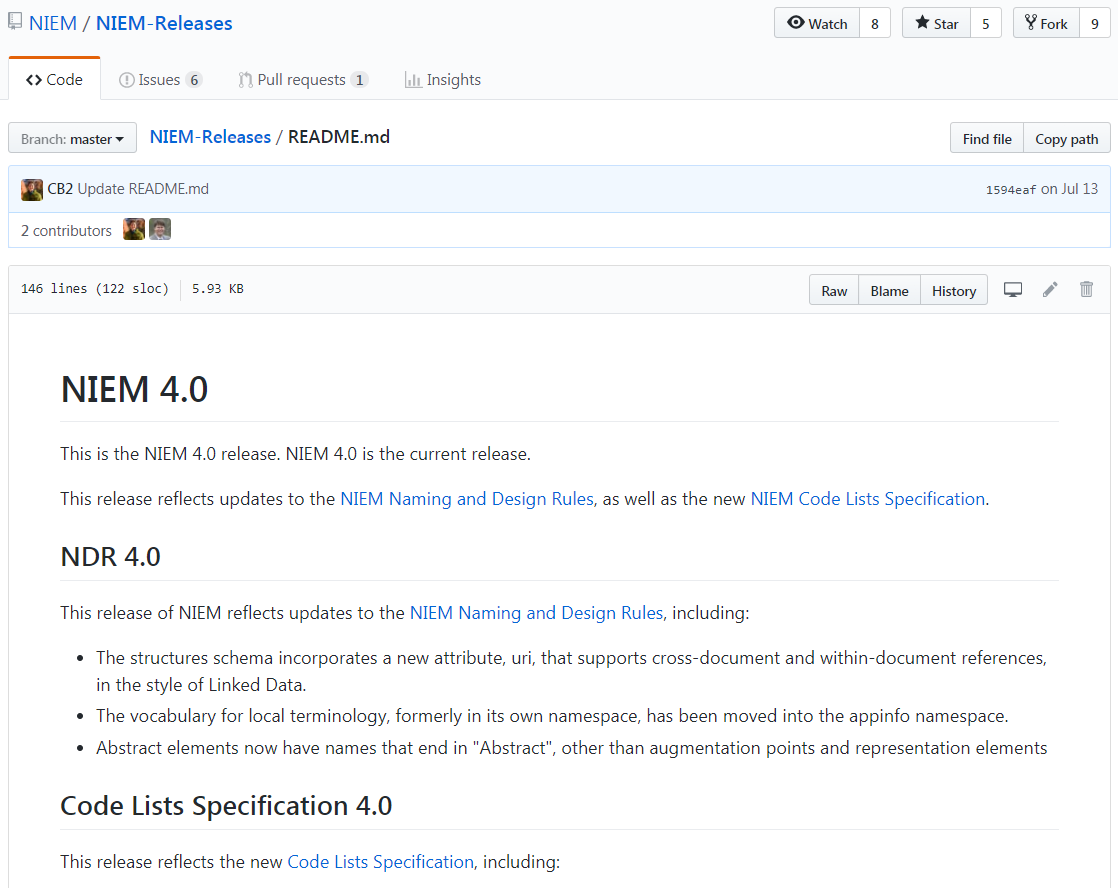 The NIEM model spreadsheet provides user documentation for the properties and types of Core and the domain namespaces.

Each of these namespaces is represented in its own tab, with several supporting tabs at the end of the spreadsheet.

The main tabs are organized alphabetically by types (highlighted in yellow) and their sub-elements. Related components are hyperlinked for easier navigation.

This file is located in the root of the package or repo. The file name is “niem-version.xlsx”, with “version” representing the release number. For the 4.0 release, the spreadsheet is named niem-4.0.xlsx. 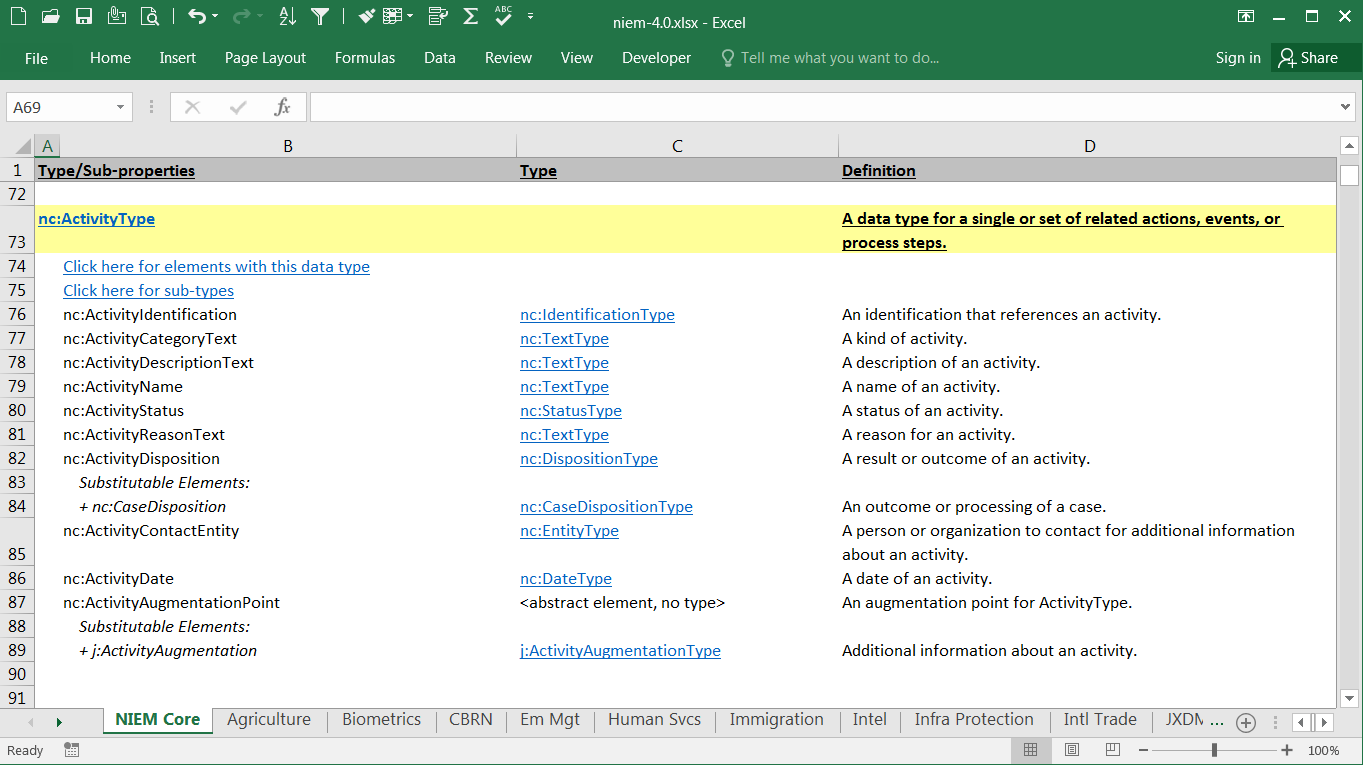 The NIEM Code spreadsheet provides user documentation for the codes defined in a NIEM release.

This file is located in the root of the package or repo. The file name is niem-[version]-codes.xlsx. 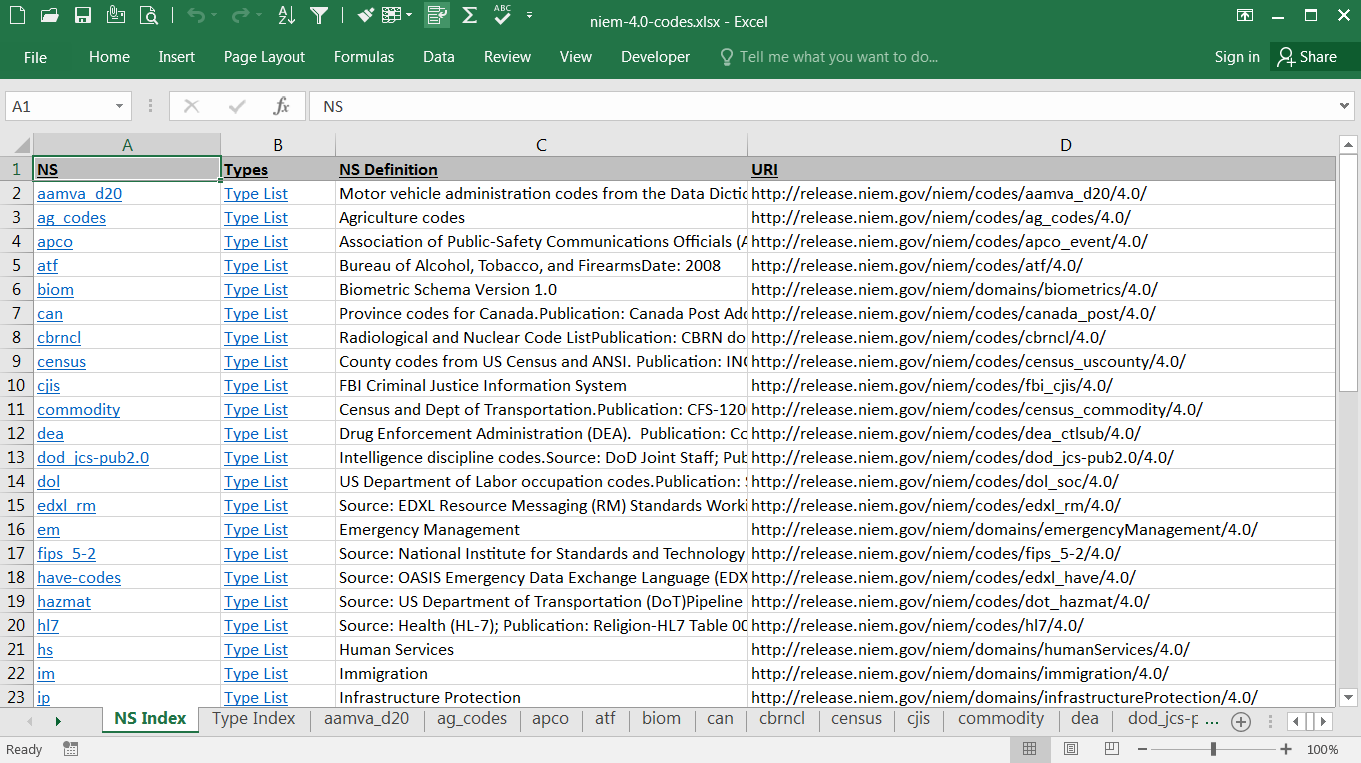 The second tab is a full index of the code types for each namespace. Click on the type name to go directly to the codes for that type. 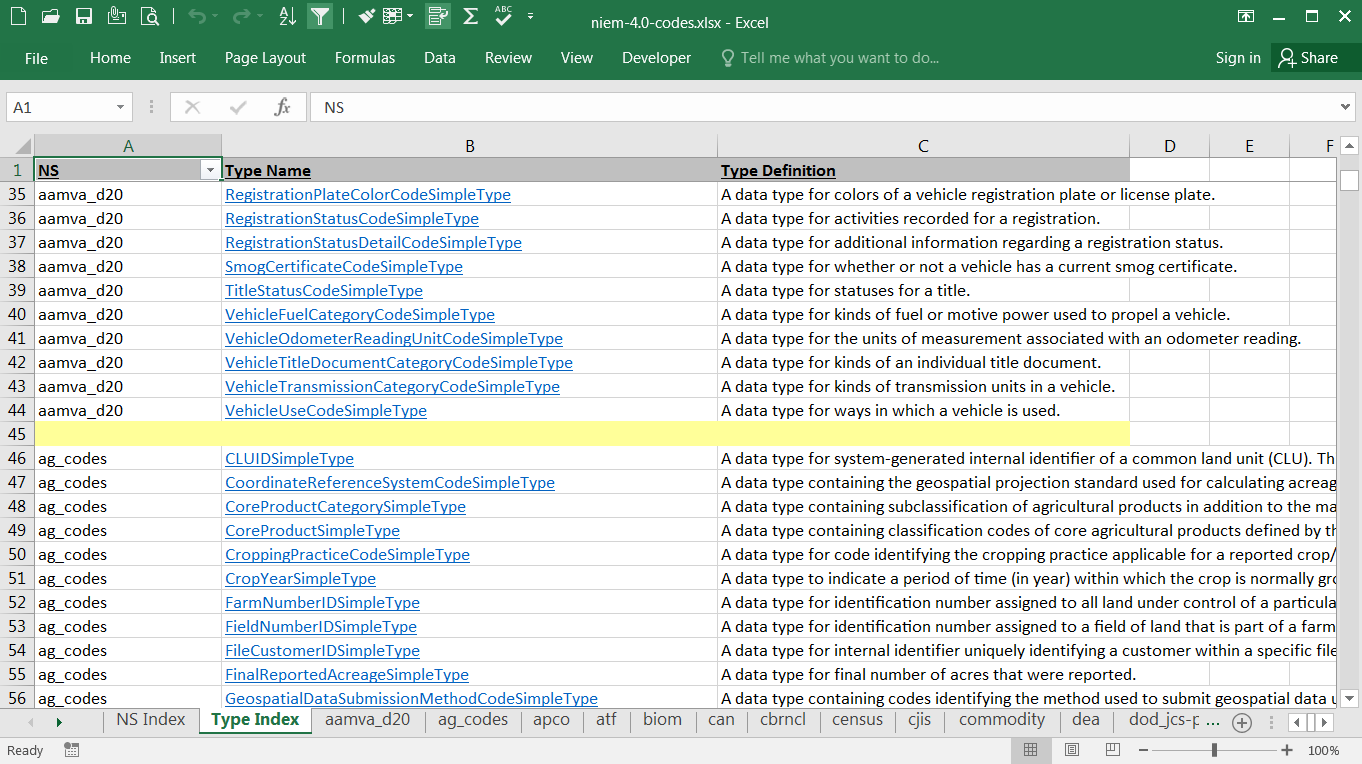 The remaining tabs represent each NIEM namespace that defines codes. 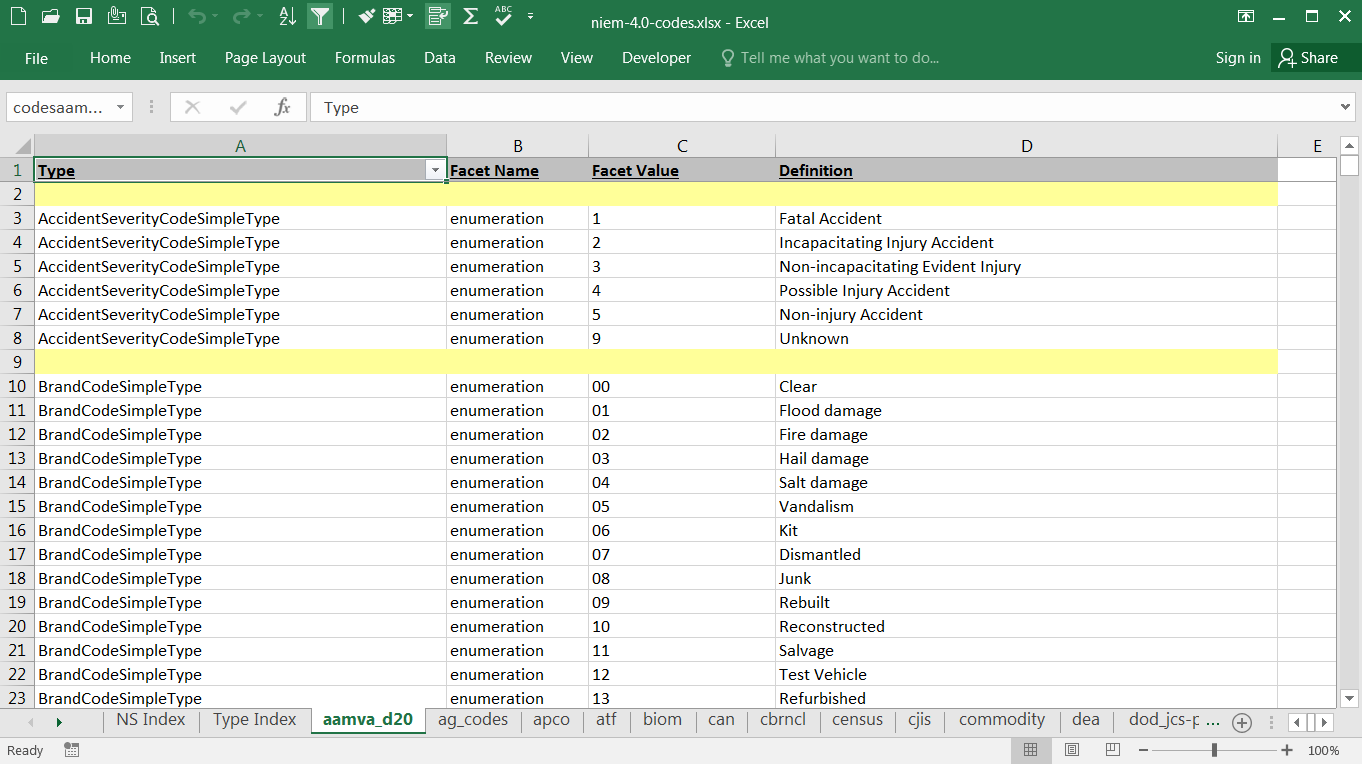 The NIEM change log spreadsheet documents the changes between the given release and the previous one.

For items marked as modified, the fields that have changed are in the standard black font. Fields that remain the same as in the previous release are in a lighter gray font.

Note that not all changes are recorded with the same amount of details. There are cases where changes to a component do not show up as an edit, but as separate delete and add operations.

This file is located in the root of the package or repo. The file name is niem-version-changelog.xlsx. 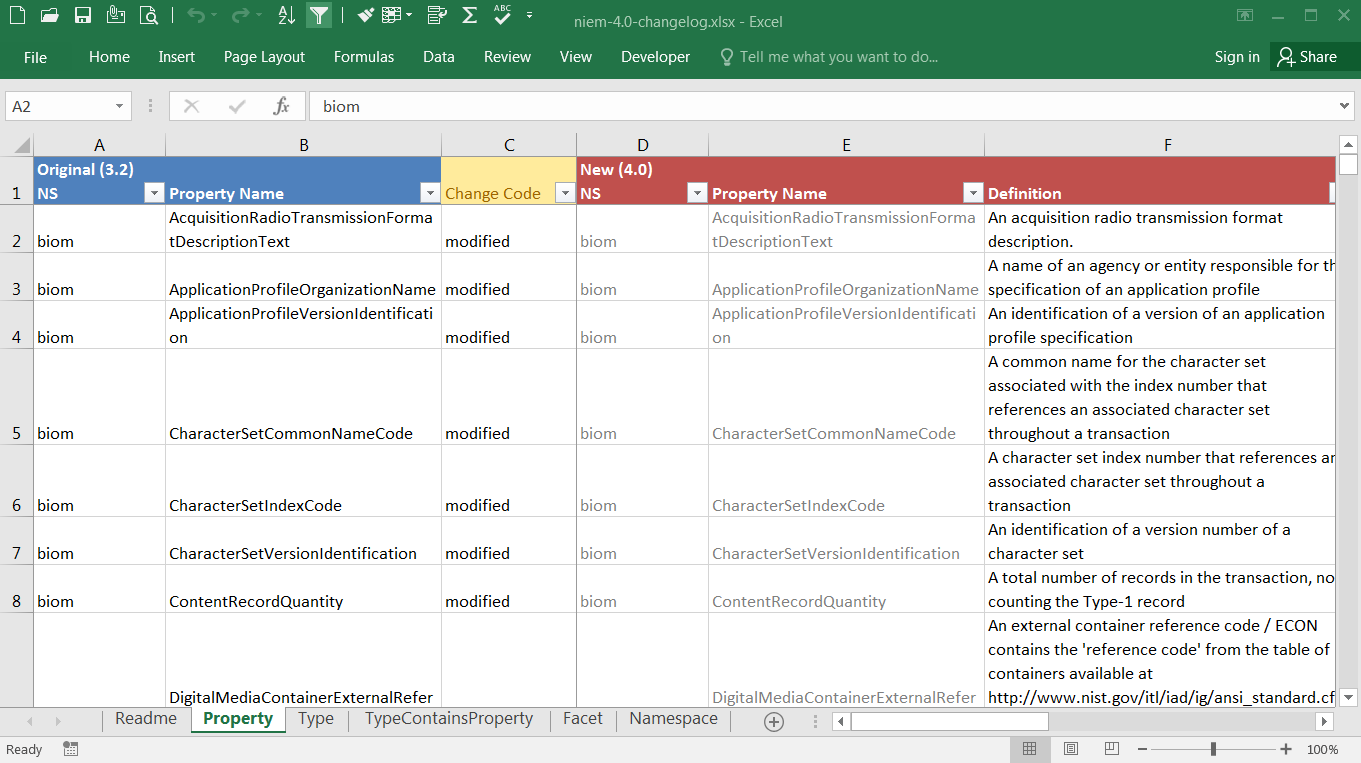 NIEM CSVs provide an alternate, non-authoritative representation of the NIEM schema content in a tabular format. They are made available to support developers who wish to import the model content without having to parse the schemas.

NIEM CSVs provide information about the content in a release:

On GitHub, the CSV formats are located in the csv directory off the root. The release page on release.niem.gov contains CSVs, plus two additional formats representing the same information: a spreadsheet and an Access database.

Below is a snapshot from the Property CSV: 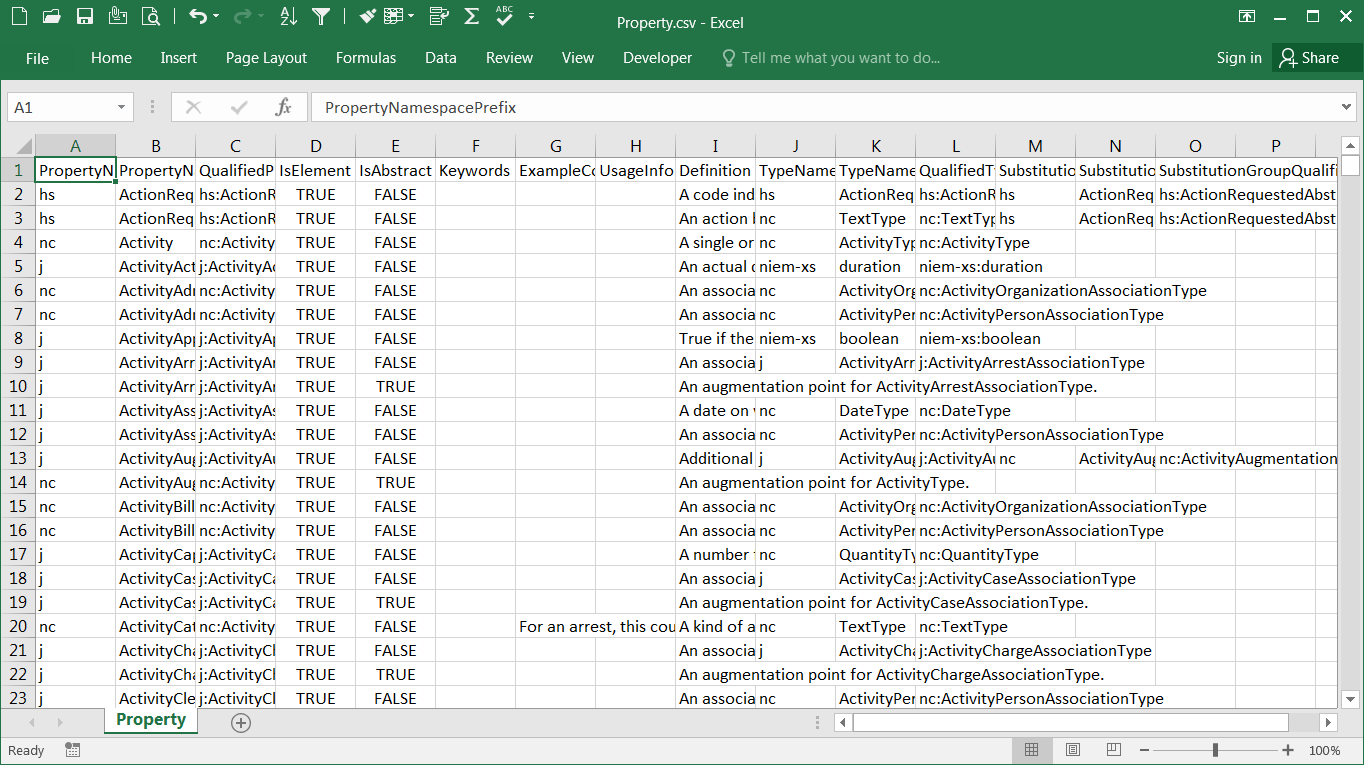 Other standard artifacts in a NIEM release are: