The NIEM Conformance Specification introduces NIEM conformance and provides a general normative definition for its meaning, how it applies, and to what it does and does not apply. It describes the benefits of conformance, and refers to sources of information, tools, and help.

The term conformance is often used very broadly, but it has a very specific meaning within NIEM. Artifacts, like schemas and IEPDs, can be built so that they conform to a specific conformance target. Conformance targets and their associated rules are defined by NIEM specifications.

System, tools, or databases may have capabilities designed to specifically support the development of NIEM-conformant artifacts, but those systems art not, themselves, NIEM-conformant. Such tools or systems are considered NIEM-aware or NIEM-supporting.

NIEM-conformance does not imply NIEM compliance. Compliance indicates enforcement and the existence of an official certification process that verifies conformance or level of conformance. NIEM does not currently define compliance.

Early in the development of NIEM (and its predecessor), governance committees discussed the language to be used in solicitations (such grants, RFPs, etc.) that require use of NIEM. They considered both terms, and concluded that the term compliance does not convey appropriate intent; it is too regulatory (for example, U.S. citizens and residents must comply with the U.S. tax code). The objectives of NIEM are to facilitate and support interoperability, NOT to force or regulate it.

A conformance target is a special class of artifact, defined by a NIEM specification, with an applicable set of normative rules.

The images below show information about conformance target reference schema document (REF) from the NDR 4.0 specification. 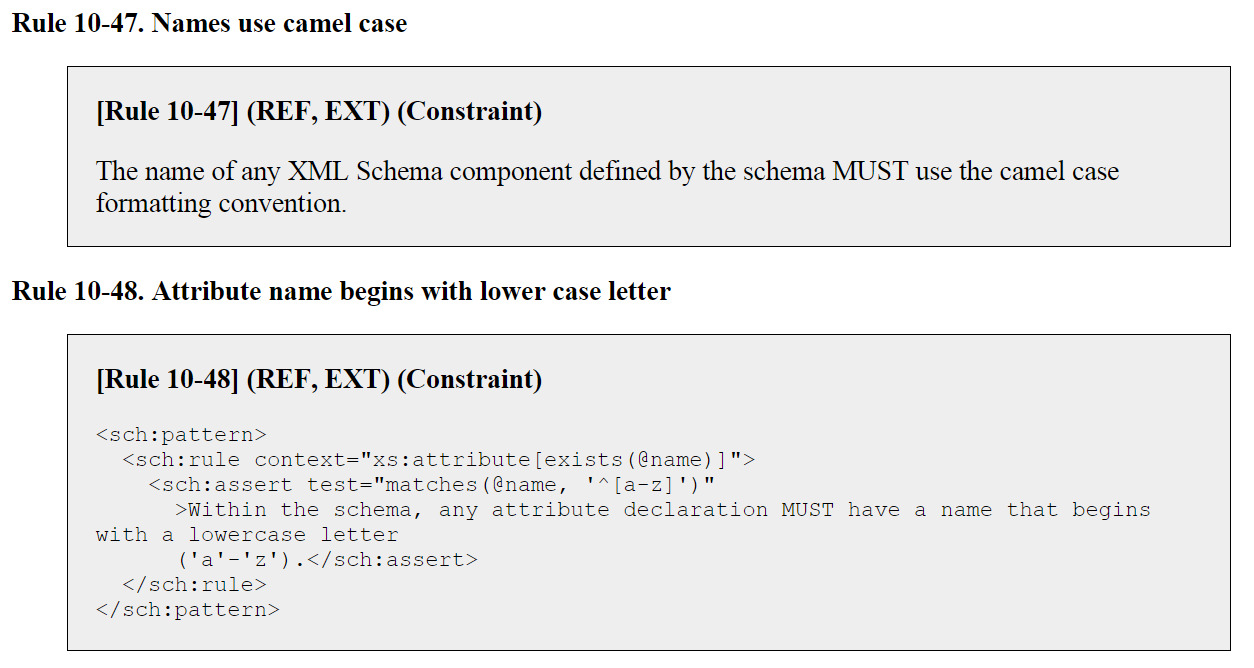 See the Conformance Targets Attribute Specification for more information on how this is done.

An artifact is NIEM-conformant if and only if it:

NIEM developed a set of practices for information exchanges, which include:

Reuse NIEM elements and types whenever possible rather than creating new ones.

In an IEPD extension schema, this means reference NIEM elements and types that are declared in a full NIEM release or in a NIEM subset. Do not recreate elements in the extension schema with NIEM names and definitions.

If a type like nc:PersonType does not contain all of the properties that are needed for an exchange, create extensions or augmentations.

Construct new data components to express any concepts specific to an exchange or community which the NIEM model does not cover.

4. Use NIEM techniques for data modeling

Make the specifications for information exchanges precise, so that tools and systems can support the use and comprehension of messages, as well as ensuring each messages obeys the rules of their specifications

Construct messages so tools and systems can ensure they follow their specifications and reuse NIEM terms (namespaces and local names), so the identity and expected content of messages are consistent and unambiguous

NIEM has practices, methods, and formats for the pieces that compose an information exchange. These are expressed as a set of specifications. Specifications define the rules and procedures for creating content which is NIEM-conformant.

We encourage developers to use tools provided by the NIEM program to construct and validate their information exchanges as NIEM-conformant, including: